Advent 2012:  “Behold, I am doing a new thing; now it springs forth, do you not perceive it? I will make a way in the wilderness and rivers in the desert.” (Isa. 43:19)
May I suggest, during this season of Advent, that the ‘new thing’ is about building the Beloved Community of Shalom in a new and different way for a new time and place.  The old ways are dying, and a new world is emerging. We’re living on the edge.  Let’s mark it, prepare for it, and help usher in this New Age of the Spirit in which Shalom (health, healing, harmony and wholeness) is available to all!
Signs of the Times
Something huge is happening all around us: economies are failing, Nation-States ending, religious institutions crumbling, denominations declining, political parties morphing, the planet warming…. We are living in apocalyptic times (again).
Jesus’ call to discern the “signs of the times”? (Luke 21).  Those signs show that the current order—physical, political, social, economic, religous—has crack and is falling apart.  Some say we’ve reached a point of no return (whether it be the financial cliff or global warming) and that there is no hope left.  While it is true that no incremental social improvement in the status quo can lead to the fulfillment of  the vision of “shalom for all”, what is happening now may be just the “birth pangs” of a whole new world and the “new thing” that God desires. The passing of the old order does not happen without considerable cost and pain, so that the new order may finally emerge.
Apocalypse—Living on the Edge
Biblically, the Greek word apokalypsis means to unveil, to disclose, to reveal. In popular usage, it refers to a ‘end’ of some kind and often implies the catastrophic end of the world (as it is known) and the revelation of a world (as it is envisioned)–signaled and determined by divine action or fate.  Apocalyptic consciousness means ‘the times they are a changin’, we’re living on a hinge of history, on the cusp of something old and new, and we are sometimes fearful and anxious about the Change that is coming, the Transformation that already is here. 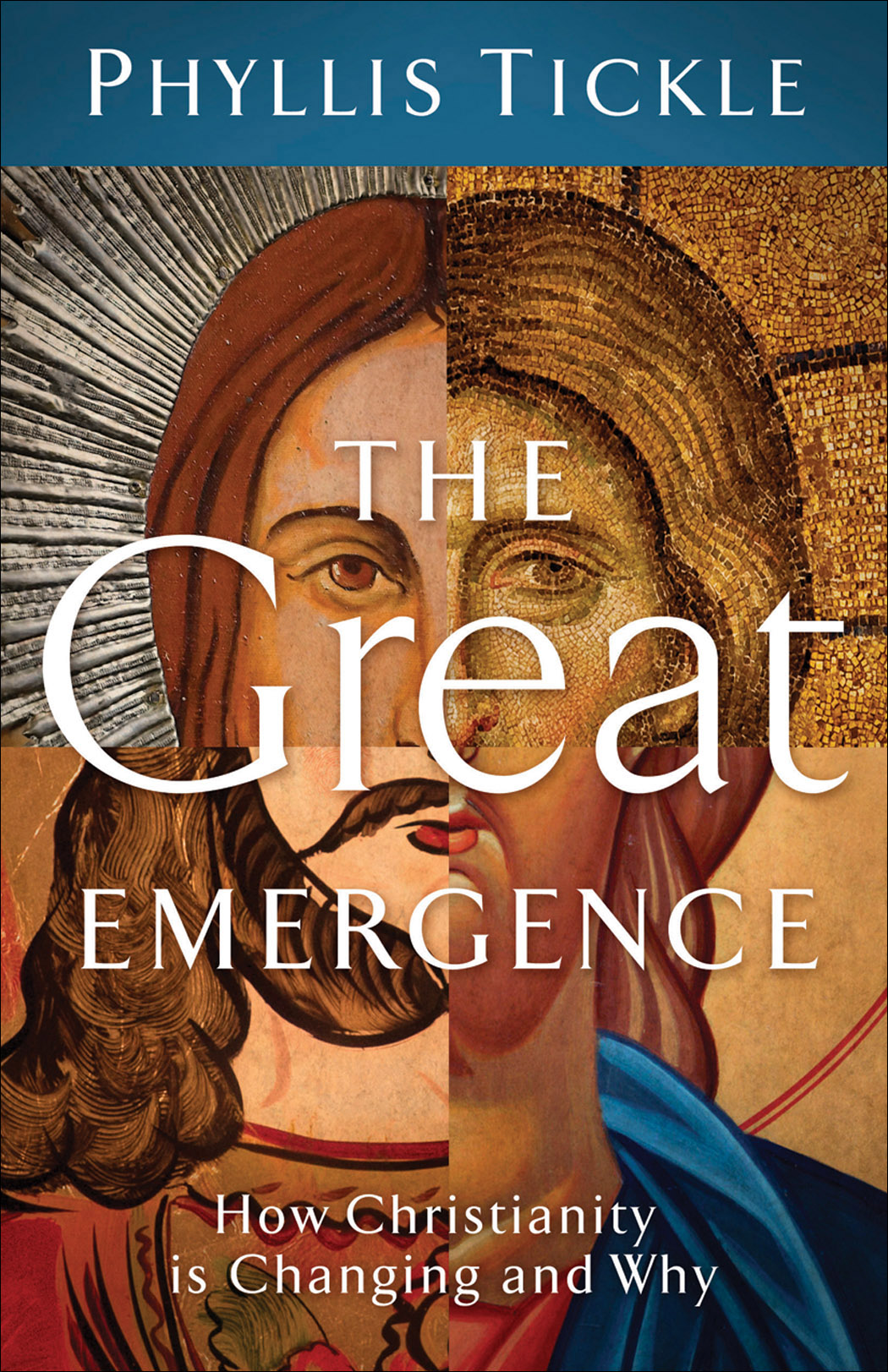 The Great Emergence
In her book, The Great Emergence, Phyllis Tickle tackles the troubling topic of what is behind the monumental change and transformation of the social and religious structures of our existence. In it she supports the eschatological notion that the dominant belief systems, social paradigms and cultural worldviews shift periodically according to millennial units of the cosmic calendar.
She quotes Anglican Bishop Mark Dyer who employs a helpful metaphor about the Big Change coming and Transformation we are experiencing in popular and religious culture. Christian history, he says, can be divided into five hundred-year periods marked by upheaval and transformation:  “…about every five hundred years the Church feels compelled to hold a giant rummage sale.” Phyllis Tickle calls the rummage sale preparing the way for the new thing God is doing in the world “The Great Emergence.” (The Great Emergence, p. 16)
I, too, believe we are living through one of those five-hundred year-end sales in human history.  And I based my perspective in the ancient (Platonic) theory of aeons and Christian apocalyptic eschatology (Dr. Carl Savage and I co-teach an online course on Apocalyptic Eschatology and New Millennialism at Drew University in which we explore these ideas and theories).
Ancient Millennialism
Millennialism is the ancient (Platonic) belief that there are multiple aeons or ages of the world, and that they begin, end and unfold in 1000 year (millennial) periods, marked by apocalyptic consciousness, social upheaval and spiritual transformation.   Neo-Platonists calculate the aeons according to a “Platonic Year” of 2000 revolutions of the earth around the sun.  Each Year is influenced by one of the twelve signs of the Zodiac, as each gives rise to the next sign, as the Zodiacal movement advances (backwards) through time and space.  Thus, Aries, whose influence dominated world cultures for 2000 years prior to the birth of the Christ, gave rise Pisces, whose influence has dominated our common era (CE).  Right now, according to this millennial theory, Pisces is giving rise to a new dominant sign on the horizon.  In popular culture, New Age proponents have been celebrating the dawning of the Age of Aquarius since the mid 1960’s.  The question is, what date(s) can be used to mark the end and beginning of a new era?  1968?  1999?  2001?  2012?  2020?
Since the third century A.D. sabbatical millennialists (Jewish and Christian) envisioned the beginning and end points of world history as six millennia (7,000 years, or 7 days), and sought to measure time from Creation to the End of Days. Other cultural calendars measured time by generations, quadrennial Olympiads, cycles and dynasties. Anticipating, calculating and marking the final Millennium of the Advent of God’s kingdom on earth has been proposed in every generation, especially at the ends of centuries and 500 year periods of Christian history.
New Age of the Spirit
Medieval mystic, Joachim of Fiore (1135-1202), witnessed the European upheavals in church and state during the Crusades, and envisioned a new “Age of the Spirit” in which peace and goodwill toward all would prevail. The long-awaited New Millennium would come in bi-millennial stages, he prophesied. Just as the “Age of the Father” lasted two thousand years and gave rise to the “Age of the Son” after the birth of Christ (“the Sacred Fish”), the present Age of the Son will last 2000 years, he prophesied, and then will give rise to an “Age of the Spirit.” Anticipating this spiritual shift, in part, gave rise to the early Franciscan movement.
Carl Jung and others build on the Platonic Year concept and add that these mega bi-millennial periods of cosmic upheaval can be further sub-divided into 500-year units of change and transformation, mirrored in the Zodiacal movements of influence. (See Jung’s volume, Aeon)
“The end of the world” is about the end of an era and the beginning of a new millennial age of human consciousness and spirituality.  According to Jung and others who believe in spiritual evolution, a critical mass of human consciousness will continue to converge and mutate into new possibilities of enlightened consciousness, integrative thinking/feeling, and a deeper spiritual existence.
Each religious tradition has different ways of expressing this. In my Christian tradition, we would say it this way:  “Let this nous/mind (spiritual consciousness) be in you as it is in Christ Jesus
If it is true that every 2000 years or so, a major aeon ends and a new bi-millennial Platonic Year begins, then at the end of this apocalyptic year, I want to proclaim, a New Age of the Spirit has begun.  “Do you not perceive it?” 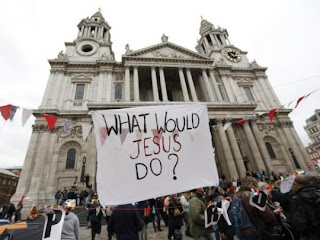 A New World is Possible
What interests me most about apocalyptic millennial theory of historic and cosmic eras, is that we seem to be experiencing one of the bi-millennial moments now in the history of human consciousness.   And I want to dispel the fear and harness this good energy in popular culture–anticipating the end of an age and the dawning of a new era of peace and justice–to help build the Beloved Community of Shalom in the world.
“A New World is Possible” is one of the hopeful chants of the Occupy Movement, whose vision of social justice includes radical democracy, separation of Corporation and State, forgiveness of debt, right use of money, and shared power.  Unfortunately, as I’ve described in previous blog posts, the Occupy Movement has been somewhat coopted by ‘special interest groups’ and cannot fully embody the “new thing” God is doing in the world. Still, I recommend checking out the current Occupy message of “rolling Jubilee” which is informed by Jewish, Muslim and Christian traditions.
Pastorally speaking, we need to do several things:
As postmodern prophet and evangelist, Leonard Sweet, declares:  “The world as we knew it is over and a new world has already begun. The question is not whether God will be in the future, but whether the church will be present to the new reality.”
Denial is epidemic.  Hope is afloat.  Shalom in on the loose!   Occupy Advent!
“Behold, I am doing a new thing; now it springs forth, do you not perceive it? I will make a way in the wilderness and rivers in the desert.” (Isa. 43:19)