Greetings from Sacramento Convention Center—gathering spot for the California-Nevada Annual Conference of The United Methodist Church—in which I am an appointed clergy member.

Dean Kuan, Rev. Kathy LaPoint  and I co-hosted a Drew Theological School luncheon today, attended not only by our usual handful of Theological School alumni, but by 55 youth and young adult delegates exploring a call to ministry; learning about Drew and Communities of Shalom.

What a delight to meet one of the group’s leaders, Kelly Newell, as well as other members of an urban ministry team assigned to my former church in the Haight-Ashbury neighborhood of San Francisco.  Kelly has a vision of youth and young adults living together in community for weeks or months in the church building or immediate neighborhood, being equipped for community service and compassionate ministry, to do justice in the city as community organizers and ministers of shalom.  By seeking the health and wholeness of the community, she believes, the church can truly be the Church for others and not just for its own survival as a local congregation, denominational institution or voluntary association.
Hamilton United Methodist Church, where I served as Associate Pastor in the early 1990’s, is well situated and positioned to become a “ShalomChurch” for others.  It’s located one block off the infamous corner of Haight and Ashbury (where I once lived) that attracted hippies in the 1960’s and still supports a counter culture and retro-1960’s crowd.  Hamilton Church historically has housed the Haight-Asbhury Food Program and Hamilton Family Center—SF’s first emergency family shelter—and is still well-known in the neighborhood as a place of help and hope. And its in the center of 30 square blocks between Golden Gate Park, the Pan Handle of the Park and Buena Vista Park—a perfect Shalom Zone where hidden assets can be mobilized and aligned for community development.
One of my Drew doctoral students, Rev. Schuyler Rhodes, is involved in the Hamilton Church revitalization project. Schuyler is writing his doctoral thesis on the marks of a Shalom Church and developing a model of ministry based on the theology and practice of shalom.  Another Drew student, Susan Goodman, is assigned to Hamilton Church as a summer intern, and will be directly involved in urban ministry in the Haight Ashbury neighborhood.   What a joy to see a church congregation that was officially closed a few years ago, re-open its doors to the community as a Christian center of help and hope, with plans to re-plant a worshipping congregation within the building. 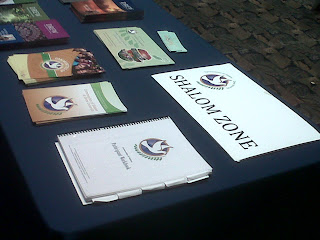