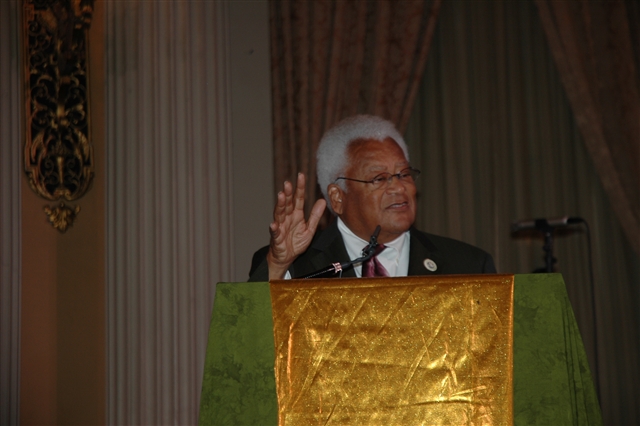 The Rev. James Lawson preached at the opening plenary/Communion service at the 20th Anniversary Shalom Summit, Oct. 3-6, 2012, in Los Angeles.

The 20th Anniversary Shalom Summit in Los Angeles, Oct. 3-6, was a celebration of origins that also marked a turning point in the life of the movement itself.
The Shalom Initiative of The United Methodist Church traces its beginnings to Los Angeles and to a pivotal point in the life of one man, Rodney King, whose beating by police officers, caught on videotape, set the stage for a brutal chapter in our nation’s history. When three of the officers were acquitted of charges and no verdict was reached in the case of the fourth, rioting broke out in Los Angeles that claimed more than 50 lives, injured more than 2,000, and cost the city an estimated $1 billion. During the riots, King appeared on television and issued the famously haunting plea, “Can we all get along?”
Twenty years later, that question seemed to be met with a positive response as 168 people gathered at the Biltmore Hotel to trade shalom success stories. While no one claimed that racial inequality and economic injustice have been vanquished, their narratives – and the diversity in the room itself – testified to the possibility that people can, indeed, work in harmony to achieve a common purpose.
A multi-faith movement
Indeed, a spirit of cooperation is at the heart of the shalom movement. The program focuses on organizing the stakeholders in a given geographic area, or “shalom zone,” and then identifying and building upon the positives, or assets, of the area to effect systemic and sustainable change that results in a healthy community. Multi-cultural, multi-faith collaboration is an essential part of the process and is one of the six tenets, called “threads of shalom.”

The Rev. Dr. Michael Christensen, international director of Communities of Shalom, says the multi-faith aspect is “probably the hardest thread, and the hardest training to do,” because Christians are accustomed to thinking in terms of evangelism, helping people come to Christ, and growing their congregations. The shalom approach, by contrast, begins with outlining a geographic area, taking stock of its occupants, and asking them to look beyond the confines of religious identity and work together for the good of the community.
“So when you draw your Shalom Zone, and you say, ‘here’s our geographical area that we are called to transform, you have to ask the question, in Shalom Zone training, ‘Who lives here? Who worships here? What faith communities are rooted in this community?'” Christensen says. “If there’s a Jewish synagogue around the corner from the United Methodist church, the Methodists may host the table, but everyone’s invited … because we have a common concern and interest about what goes on in our neighborhood. If there’s a mosque, then you invite the Muslims, and say, ‘shalom, salaam, peace!’ because we have common interest to transform our community. We’re not saying to the Muslims, ‘Come over to our side, come to our church, and worship as Christians'; we want to affirm them in their own faith tradition … but we can do things together to transform our community.”
Read More:  full article on Shalom Summit