Fellow Shalomers,
I want to share a Christmas story of faith and resurrection, one in which I participated in 27 years ago, and which I shared with my congregation in Berkeley last night at our Candlelight Christmas Eve service at Epworth UMC:

We’ve grown accustomed here in Berkeley to seeing homeless people on the streets, some sleeping in doorways or parks, near BART, and even on church doorsteps.   Many find their way to shelters, and one of the ministries this church supports financially and by cooking meals is the Berkeley Men’s shelter.
But 30 years ago, when I first began pastoral ministry in SF, it was a shocking thing to see not only homeless men, but also homeless families living in the parks and on the streets.  During the cold winter of 1985, several homeless people died from hypothermia in the parks or on the streets, and so our church started handling out blankets and supporting the Haight Ashbury hot soup kitchen.
At Hamilton UMC, several of us decided to open up a Family Shelter in the basement of the church. It was hard to believe that SF, at that time, had no emergency family shelters.  Only men’s shelters and women’s safe houses, but nothing for families who wanted to try to stay together.   So, without adequate funding, and just trying to respond to needs right outside our doors, we opened up The Hamilton Family Center for temporarily displaced single parents, families and expectant couples. (kind of like Jesus’s family in Bethlehem long ago).
We didn’t have any beds at the church, but we had plenty of mats for families to sleep on. We had floor space rather than individual rooms.  And we had a lot of enthusiasm, volunteers and donations.  Things ran fairly smoothly the first year.
Before the end of the second year, however, we were in trouble. Our program director resigned, as did our board chair.  We had run out of money, lost our insurance coverage, and we knew we had to close.  We called an emergency board meeting, and our program director sadly reported: “We can’t pay the new premium for liability insurance, and even if we could, our current carrier will no longer insure us.   The staff have not been paid in two months. WE owe PG&E $1,200, the phone company $240, and the custodian $400. Our bank account has only change.”   And it was one week before Christmas!
John Meehan, an old hippie still living in the Haight, who had started the Haight Ashbury Food Program in the early 70’s, stood up in the board meeting and said with a passion:
“THIS IS A CHURCH!  DO WE REALLY WANT TO BE IN A POSITION ON CHRISTMAS EVE TO HAVE A MARY, GREAT WITH CHILD, COMING HERE AND HAVE NO ROOM IN THE INN?  I VOTE TO STAY OPEN, WITH OR WITHOUT INSURANCE, AT LEAST UNTIL AFTER CHRISTMAS, FOR CHRIST’S SAKE!
So, we decided to keep the church doors open for as long as we could, offer what food we had, and ask volunteers to come and supervise.  We hosted about 50 people a night, mostly women with young children.  I can still remember a family of five with school age kids.   A local reporter for the SF Chronicle got wind of the situation, and wrote a feature with photos entitled:  “Church That Helps the Homeless Could Use Some Help.”
Considerable interest and support was generated by that Christmas story.  Neighbors dropped by with donations, local merchants contributed food, clothing and toys.  Someone paid our utility bill.  And someone in the Mayor’s Office got us new insurance coverage.
On Christmas Eve, the Shelter was open. The church basement was beautifully decorated with Christmas lights and images. There was a festive mood at midnight when Rebecca and I arrived with a Christmas Tree.  An hour before, a young mother had arrived at the shelter with a two-month old baby. There were no beds, only mats, and we had run out of blankets.   But someone found an extra blanket and a shopping cart from the local grocery store.
SUDDENTLY, I remembered John’s prophesy “to stay open, for Christ’s sake.”
It was then that I suddenly recognized Christmas:  MARY HAD NO PLACE TO LAY HER HEAD SO SHE FOUND A SHELTER, WRAPPED HER BABY IN A BLANKET, AND LAID HIM IN A SHOPPING CART.
After the holidays, the board met again.  With new momentum and provisions, we found a way to pay our staff their back salaries, appoint a new program director, and secure annual funding. We gave thanks for the resurrection of a shelter at Christmas time.  And the Hamilton Family Center managed to stay open for the next 27 years, and is still operating today:    http://hamiltonfamilycenter.org/
I tell you this story so that you will keep on the look out for Mary. You will recognize her when you see her, and know Christmas when you see it…
Michael J. Christensen
Director, Communities of Shalom
Pastor, Epworth Berkeley UMC
The Epworth Pulpit
Christmas Eve Candlelight Service
December 24, 2012
Epworth Berkeley United Methodist Church 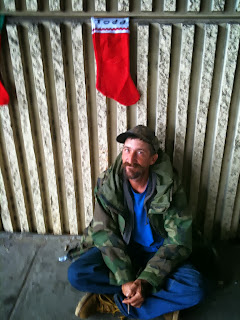